and What Changes for Directory Developers

Google Maps Platform, did you hear about it?

Google announced today the launch of the Google Maps Platform. They described the new platform as:

a simplified product structure, pay as you go pricing for all, and more

Technically speaking, from a developers point of view there are no changes to how the Google Maps API will work, the only difference will be in regards to their pricing model.

Starting from June 11, 2018, if you don’t enable billing with a credit card within your Google Maps Platform account and you don’t have have a valid API key for all projects, Google Maps will stop working on your website.

Does it mean that using Google Maps API is no longer free?

No, use up to a certain limits is still free, so it doesn’t mean that you will have to pay for sure. What it means, is that you must have a valid credit card and enable billing on your Google Maps Platform account, to use a Google Maps based applications.

What they radically changed, is the pricing model and the way they calculate the thresholds for free use.

Until 2 years ago, Google Maps API would return up to 25,000 keyless requests per day and would require an API key and payments only after exceeding the 25,000 limit for 90 consecutive days.

2 years ago they introduced the Google Maps API Key and new limits, where each new websites needed a API key and they raised the limit to 25,000 free API requests per day without grace days.

What is the new Google Maps Platform Pricing Model?

Even though they present this as a simplified product structure, the new pricing model is definitely more complex than in the past and calculating the limits to see if your website will need to pay or not, won’t be that easy.

The main simplification is that there is no longer a free general amount of requests. Each API request is counted differently depending on the service requested and they provide a $200/monthly credit to every user.

This is the pricing table for the Google Maps Platform API for Maps:

This is the pricing table for the Google Maps Platform API for Routes:

This is the pricing table for the Google Maps Platform API for Places:

How do I calculate if I’m within the limits?

These are the API that GeoDirectory currently uses:

What we use the most on GeoDirectory are definitely the Dynamic Maps and the new Google Maps Platform provides 28k free requests for those.

Considering that now they are offering 25k free requests per day, the limit appear to have been dramatically lowered.

Below is an example of a small directory we run (75 listings) for the last 30 days: 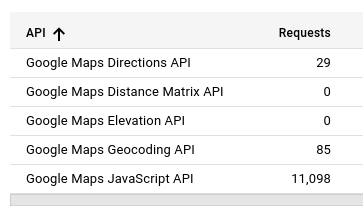 On the face of it the site is using about 40% of its free allowance for about 30k sessions and about 120k page views. For relevancy this site makes around $5,000 a year.

Google provided a transition tool. You need to visit this URL: https://mapsplatformtransition.withgoogle.com/ and login in the Google Account used to create the Google Maps API key of your Directory. 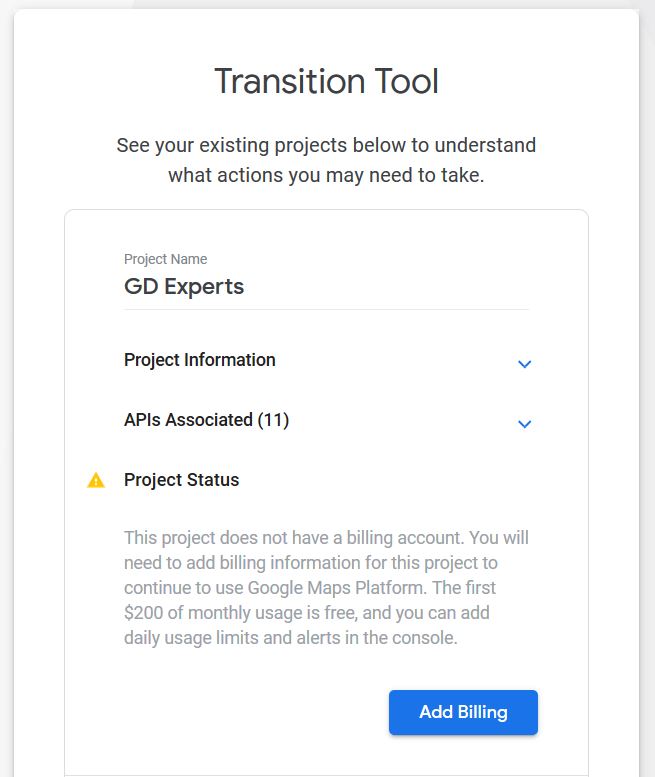 After clicking on the “Add Billing” button, you will be taken to complete a form asking for your personal information and a credit card number.

That is all you need to do.

After enabling billing, the console provides tools to set alarms or limits, so that you never overspend, even in case of unexpected traffic spikes.

What is our response to this news?

The vast majority of our users won’t be affected by these new limits, sure they might be forced to give Google their billing details but most will remain on the free plan.

GeoDirectory already has the option to use Open Street Maps (OSM) which continues to be free and does not even require an API key.

If your site is set to “Auto” for the maps provider (which it is by default) then there is a chance you are already using OSM without even knowing it.

When it’s set to “Auto” we try to load Google maps but if it fails then we will automatically switch to OSM.

It is currently unclear how Google will handle things when limits are reached, but if it is possible, we will make it so that it will automatically transition to OSM. Just like it does now for users who live in countries where the Google API is blocked.

We may also look at ways to reduce API calls such as implementing static maps (which are 100% free) on the details pages that only load dynamic maps when interacted with.

We knew this day would come the day Google implemented mandatory API keys for all map API calls.

Its almost 2 years since that came into effect, back then this change broke many old plugins and themes that had not developed a system to add a API key to the map calls.

For that we wrote a small plugin to easily generate a API key and fix the calls on the fly https://wordpress.org/plugins/api-key-for-google-maps/. This is now helping over 100,000 websites!

The small percentage of GeoDirectory customers that will be affected by this, have the option to switch to OSM and continue to use maps on their directory for free.

We will continue to develop solutions that reduce API calls where possible.

Paolo Tajani is the co-founder and growth hacker of AyeCode LTD. With his business partner Stiofan, they are the makers of the GeoDirectory, UsersWP and Invoicing plugins for WordPress. Paolo developed his first WordPress website in 2008. In 2011 he met Stiofan O'Connor and together they started building and marketing successful themes and plugins for WordPress. Today their products are used by +100.000 active websites. View more posts